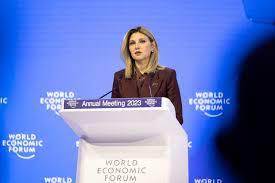 OLENA Zelenska, the First Lady of Ukraine, has on Tuesday called for the restoration of international law and the UN Charter. Speaking at the Opening Plenary of the 53rd World Economic Forum Annual Meeting, she told world leaders “deep inside we believe there is no global problem that humankind cannot resolve”.

Zelenska asked the gathering: “What if the sum of our influence doesn’t outweigh the Russian aggression?” She went on to say: “Our combined influence is bigger than the weight of our combined problems. That is why it is all the more important right now to use this influence when Russia’s invasion threatens a large-scale collapse of the world as we know it.”

She asked participants to imagine what could happen if tanks are allowed to strike at nuclear power stations; what could happen to inflation or the cost of living if tens of millions of Ukrainians are forced to become migrants; to climate neutrality when the world can’t stop Russia from burning entire cities in Ukraine. “In other words, what if the sum of our influence doesn’t outweigh the Russian aggression?” she said.

Zelenska called on world leaders to support her husband Ukrainian President Volodymyr Zelenskyy’s 10-point proposal to end the war. This includes an end to hostilities, restoration of Ukraine’s borders with Russia, release of all prisoners and deportees, as well as assurance of food and energy security and justice.

Klaus Schwab, Founder and Executive Chairman of the World Economic Forum, welcoming participants to the Annual Meeting, emphasized the need for cooperation “to create more cohesive societies where people can thrive”. He said: “We believe we can do it – through innovation, human goodwill and ingenuity. We have the capacity to turn the challenges into opportunities.”

Alain Berset, President of the Swiss Confederation, also underlined the need for a renewed global partnership on the transnational, civilizational challenges of climate change, pandemic, war and nuclear proliferation. He described the Annual Meeting as a place of “optimism, of can-do spirit”.

Ascribing the worldwide rise of populism to inequity, Berset said leaders, including at past Annual Meetings, have given more thought to efficiency and prosperity than to social fairness – within and between countries – causing already fragile states to weaken further. “First, by climate change and the pandemic, and then by the war in Ukraine,” he said.

Yet, as the pandemic and the war in Ukraine have made clear, the problems experienced by fragile states inevitably affect countries near and far. “In the form of migration, corruption, terrorism,” Berset said, adding: “We must do all we can to support fragile states – otherwise they risk becoming failed states.”

The World Economic Forum Annual Meeting 2023 convenes the world’s foremost leaders under the theme Cooperation in a Fragmented World. It calls on world leaders to address immediate economic, energy and food crises while laying the groundwork for a more sustainable, resilient world.