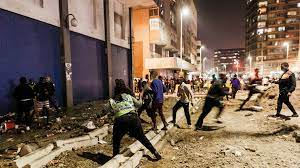 AS the 2023 general elections draw near, Nigerian university students have been urged to see themselves as tools of achieving peace and national integration and aviod being used to perpetrate violence.

Prof Afis Oladosu, Department of Arabic and Islamic Studies, University of Ibadan, gave the advicte during a workshop on Using lnterfaith Dialogue as tool to Promote National Integration (UIDPNI) held in University of Port Harcourt on Wednesday.

Oladosu said that Nigerian youths irrespective of the religions should ensure national integration by being ambassadors of peace wherever they found themselves.

The Principal Investigator, UIDPNI noted said that humanity took precedence over religion and noted that Islam and Christianity were never in conflict.

“It’s usually the adherents of Islam and Christianity that we always see engage in conflict based on ignorance and other factors, not religious.

“We have realised that over time, most efforts at promoting peaceful interfaith relations have always neglected university campuses and the undergraduates,” he said.

He stressed the need to close gap by linking undergraduates to share the ideals of peaceful interfaith relations and carry out projects along that line, with a target at promoting national integration.

“So far, in the feedback we are getting from participants, you have undergraduates who are hearing about Islam and its real message for the very first time.

“So too, you have Muslim students who are hearing the basic tenets and facts about Christianity for the first time.

“We are producing an app with a software made available to allow students learn more about this ideal of promoting our humanity and ensuring that ignorance is dispelled about the different religious faiths,” he added.

Earlier, Prof. Abdulrasaq Kilani, Co Principal Investigator, UIDPNI, said the workshop was aimed at getting the younger generation to imbibe the value of peaceful interfaith relations which would chrystalise into national integration.

Kilani, a lecturer at the University of Port Harcourt, said it was aimed to enhancing how Christians and Muslims would work together to promote equity that would advance progress in the country.

He urged the participants take advantage of the workshop to learn how to preach peace and work for peace for avoid strifes associated with religious intolerance.

He also advised the youths to avoid political violence, adding that it was a product of the elite trying to dominate or control the minds of ordinary citizens.

“We believe that education, eradication of poverty, empowerment will mitigate political violence in Nigeria.

“When people become enlightened, why would they want to kill for somebody to be in government?

He stressed the need for Nigerians to see as one irrespective of their religious beliefs, urging the participants to embrace interfaith relations and work for peace in the nation. (NAN)