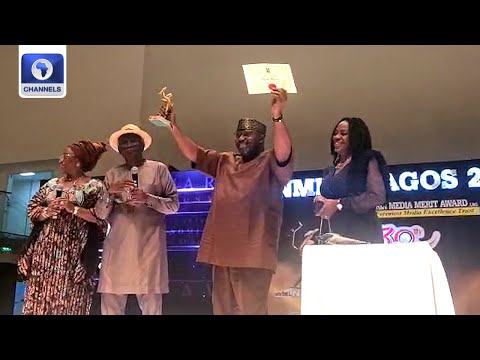 The broadcaster clinched the prize, which recognises media excellence in the country, at the 30th edition of the NMMA which took place in Lagos State on Sunday night.

Channels Television’s Controller of Programmes, Mr Ambrose Okoh, received the prize on behalf of the station alongside Mrs Yomi Otaigbe, the producer of the organisation’s breakfast show, Sunrise Daily.

In his acceptance speech, Mr Okoh thanked the organisers and the Lagos State government for hosting the event.

“I like to, on behalf of the Chairman of Channels Media Group, Dr John Momoh, and his lovely wife Mrs Olusola Momoh, appreciate the organisers and the City of Excellence (Lagos State),” he said, noting that “we are dedicating this to the staff of Channels Television.”

Governor Babajide Sanwo-Olu of Lagos State, who was among the top dignitaries that graced the event, urged media practitioners to be professional in their duties especially as the country heads to the polls next year.

In the print category of Sunday’s award ceremony, Punch emerged as the Newspaper of the Year while the Federal Radio Corporation of Nigeria (FRCN) picked the Radio Station of the Year gong.

Before the most recent win, Channels Television, which broadcasts to over 20 million people in and outside of Nigeria, claimed the prize last year.