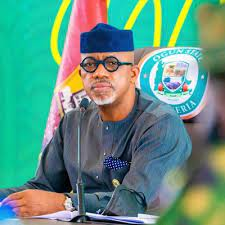 GOV. Dapo Abiodun of Ogun has advised media practitioners to shun fake news as no society could develop optimally where there was misinformation and confusion.

He appealed to media professionals to thoroughly conduct their research and ensure objective reportage of facts.

Abiodun, who made this assertion while playing host to the management of Penpushing Media at the Presidential Lodge, Abeokuta, on Wednesday, described fake news as an issue that should concern all.

“I want to thank you for what you stand for in terms of what propelled you to begin this media house, which is the issue of fake news and the way some media houses now publish sensational materials.

“There is nothing people want to read more than negative news, and when it is fake; it takes so much to correct that fake news.

“One must commend what you stand for which is presenting objective news to the public which is what media houses should continue to do as against selling fake news.

“We will continue to assist you in presenting news the way it should be in line with your ethnics and morals of your profession,” the governor noted.

He maintained that his administration would continue to execute people-oriented projects that were equitable and fairly distributed across the state.

Abiodun added that as a focused and business minded administration, efforts would be geared towards meeting peoples’ needs and allow its works to do the speaking.

He described the media as the vital link to democracy as it provides the checks and balances needed for democracy to thrive.

The governor appreciated the Pen pushing media outfit for being supportive of his administration and especially lauded the outfit for extending the hand of fellowship to the less privileged.

He called on other corporate organisations to take a cue and make meaningful impact on the lives of the people.

Earlier in her remarks, the Chairman, Editorial Board, PenPushing Media, Mrs
Funke Fadugba, said the aim of the outfit was to counter fake journalism that was causing havoc in the society by ensuring that genuine news was put across to the general public.

Fadugba commended the governor for democratising infrastructure by spreading it to all parts of the state, including the rural areas.

She said that the governor through his performance had used truth to counter negativity by working more and talking less.(NAN)