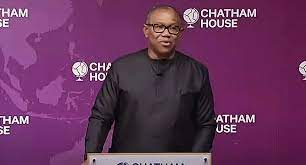 PETER Obi, Labour Party presidential candidate, has said that he will declare war on the power sector if elected president of the Federal Republic of Nigeria in the forthcoming presidential general election.

Responding to questions during his interactive session at Chatham House in London on Monday, January 16, 2023, Obi said that he would solve the power problem in the country, which is the creation of the ‘Big Boys’ who are dealers in the generator business.

“We are going to turnaround the power sector. Today, Nigeria generates 5000-6000mw of electricity for 200 million people, and South Africa, second biggest economy in the continent with 60 million people generates about 40,000 to 50,000. And South Africa in the past three months declared state of emergency on power, and said that anybody can generate up to 100 megawatts without license.

“So someone who is 60 million, generating over 40,000mw declared emergency, what do you think of somebody with 200 million generating 5000 will do? War!

“We are going to declare war on power. Anybody who stands on the way, so be it,” he said.

The Chatham House interview session with Obi was viewed online by over 60,000 people globally. The sessions will continue on Tuesday, January 17 with Mahmood Yakubu, the National Chairman, Independent National Electoral Commission, INEC, while Rabiu Kwankwaso, the presidential candidate of the New Nigeria Peoples Party, NNPP, would have his session on Wednesday, January 18, 2023.