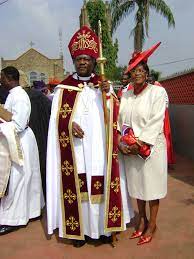 THE former Bishop of Oyo Diocese, Rt. Rev Williams Aladekugbe, was on Sunday inaugurated as the second Bishop of Ibadan North Anglican Diocese.

Aladekugbe was inaugurated as the bishop of Ibadan North following the retirement of the former Diocesan, Archbishop, Dr Segun Okubadejo in May.

The News Agency of Nigeria (NAN) reports that the event, which held at St. Peter’s Anglican Cathedral, Aremo, Ibadan, attracted dignitaries including the Bishop of Ibadan Anglican Diocese, Most Rev. Joseph Akinfenwa, other clerics and royal fathers.

Aladekugbe called for unity, harmony and love in the diocese and country at large during the inaugural sermon.

He said that the lack of unity even in the churches could hinder progress and development.

“We should delight in each other with mutual endowments, and we should promote each other’s welfare; if we have separate interests the consequences will be very bad.

“With disunity, the gospel cannot be truly preached, Christianity will become a subject of mockery, so there should be harmony always in church as stated in the Bible.

“Also, without brotherly love, there will not be peace in the family, the Church and the society at large.

“Let us come together, remember our first love, let’s make our diocese one where everybody will be somebody,” he said.

The bishop also called for transparency, accountability, truthfulness, partnership, willingness to evangelise and cordial relationship between him and the entire diocese.

He promised never to disappoint God and let the people down.

“However, I’m not a saint, so please pray for me that our ministry will please God and the Church. I need everybody’s full support to win more souls for Christ.

“We should see to it that our youths are given prominent places in the diocese and beyond.

“It’s going to be an era of transformation, friendship, development and monumental breakthroughs for the diocese,” he said.

The diocesan bishop further urged Nigerians, especially Christians to be more prayerful and sensitive as they cast their votes in 2023.

NAN reports that Aladekugbe, born on June 4, 1964, had his primary and post primary education in various institutions before enrolling at the Immanuel College of Theology and Christian Education between 1985 and 1988.

He graduated in 1988 and moved on to Olabisi Onabanjo University, Ago Iwoye, where he bagged a First Class degree, Bachelor of Arts in Religious Studies in 1994.

He later got a Master’s Degree from University of Ibadan between 1996 and 1997 and Ph.D in Christian Theology from the Olabisi Onabanjo University, in 2011.

Aladekugbe has been in ministry for over 30 years and served in various departments; he was consecrated as the Bishop of Oyo Diocese on Sept. 16, 2014.

He is married to a Civil Engineer and Fellow of the Nigerian Society of Engineers, Mrs Catherine Aladekugbe; they are blessed with four children.. (NAN)