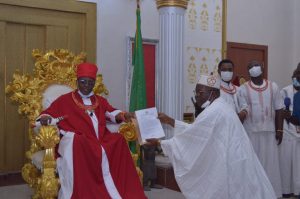 L-R His Royal Highness, Sule Idaiye, Imah of Somorika, Edo presenting letter of notification on the conferment of CFR to Oba of Benin, Oba Ewuare II last in Benin

THE Federal Government has bestowed a national award of Commander of Federal Republic (CFR) on the Oba of Benin, Oba Ewuare II.

Osaigbovo Iguobaro, Chief Press Secretary to the traditional ruler, announced this on Sunday via a press statement, a copy of which was made available to the News Agency of Nigeria (NAN).

Iguobaro said the letter of nomination for the third prestigious national award was formally presented to the first class Benin chief on Friday by another traditional ruler in the state, the Imah of Somorika, Sule Idaiye.

“The letter was dated Sept. 16, and issued on behalf of the President by the Office of the National Honours and Awards in the Federal Ministry of Special Duties and Inter-Governmental Affairs, Abuja.

“The award of recognition, which is slated for Oct. 11 by the Federal Government, is indeed a banner year of celebration for the HRM, Oba Ewuare II and the Benin Kingdom because it coincides with the month of the Royal father’s 6th coronation anniversary.

“Besides, the recognition is also coming within a calendar year after the Nigeria High Commissioner to the United Kingdom, Ambassador Sarafa Ishola, presented two repatriated artefacts — a Cockerel sculpture from Jesus College in Britain and Uhun Oba Elao’s bronze burst otherwise known as the King’s head, from the University of Aberdeen, Scotland to great Benin throne, via a presidential directive.

“Oba Ewuare II thanked President Muhammadu Buhari for the unprecedented move, and prayed God and his ancestors to guide the nation in addition to good health, wisdom to carry out his duties and responsibilities placed on his shoulders by his ancestors,” said the spokesman to the Oba.

NAN reports that the national awards will be presented by President Muhammadu Buhari to deserving Nigerians in October as part of activities marking Nigeria’s 62nd Independence Day anniversary. (NAN)