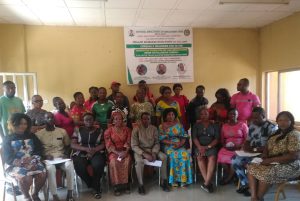 Fikpo, represented by Mrs Kate Oyoyo, Deputy Director, Human Resources, NDE, said that the exercise was one of the four agricultural loans being disburse by the directorate under Rural Employment Promotion in the state.

He said that the directorate was established with the statutory responsibility to design and implement programmes that would combat mass unemployment in the country.

“This event is memorable and life changing that will go a long way to contributing positively to the development of the youths as well as the economy of the nation.

He charged the beneficiaries to utilise the loans accordingly to achieve the desired objective of employment generation, wealth creation and poverty eradication.

While thanking the state government for partnering with the directorate, the D-G implored the beneficiaries to pay back the loan promptly.

In his address of welcome, the NDE Acting State Coordinator, Mr Sylvanus Onyeogo, thanked the Director General for approving the loans for the beneficiaries in the state.

He said that the directorate had through its numerous schemes, trained many unemployed youths and women in the state, who were currently waiting to access the loans.

Onyeogo said that the 42 beneficiaries were trained under the REP programme, which informed the disbursement of the loan facility to support them to grow their agribusinesses.

Onyeogo said that the loan would be paid into the accounts of the beneficiaries starting from Friday.

In her remarks, Mrs Maureen Onyeukwu, Loan Coordinator in the directorate, explained that disbursement was a loan and not a grant.

She warned the beneficiaries not to delay in paying back the loan to enable others waiting on the queue to benefit.

Speaking on behalf of the beneficiaries, Mr Celestine Onyehazia, thanked the NDE for granting them access to the loans while pledging their collective resolve to pay back in time. (NAN)