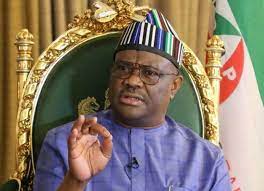 GOVERNOR Nyesom Wike of Rivers State has blamed the lingering crisis within the camp of the Peoples Democratic Party (PDP) on the failure to zone the party’s presidential ticket to a particular region.

Fielding questions from select journalists during a chat on Friday in Rivers State, he stated that the main opposition party ignorantly planted a seed of discord by leaving the ticket open for all to contest.

“Those who thought they are too powerful, highly connected, and that they own the party said there should be no zoning of the presidential ticket – ‘leave it open and let the best candidate emerge’ – because they think they have the numbers.

“We jettisoned our constitution not knowing that we are laying the foundation, the seed of discord in the future,” he said.

Although there could be some underlying issues, a major crisis in the PDP began weeks before the party held its primary in May.

This disagreement was a result of the failure of the party’s leadership to yield to the demand that its presidential ticket is zoned to the southern region of the country.

The aggrieved persons, especially party leaders from the South, said it would be morally right to zone the ticket to the region since the PDP national chairman had emerged from the North.

Despite the outcry, the party went ahead with the primary which saw a former vice president, Atiku Abubakar, emerged as the PDP presidential candidate for the 2023 general elections.

Weeks after the primary was held, the PDP presidential candidate named Governor Ifeanyi Okowa of Delta State as his running mate.

While Governor Wike said he had accepted the outcome of the primary in good faith, he insisted that Senator Iyorchia Ayu must resign as the party’s national chairman for the sake of equity since a northern presidential candidate has emerged.