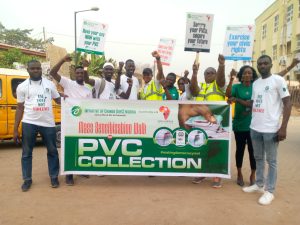 The two NGO’s urged the public to take advantage of the deadline extension for the collection of the Permanent Voter Cards (PVC) by the electoral body to pick up the card of electing authority during 2023 general elections.

The News Agency of Nigeria (NAN) reports that the Independent National Electoral Commission (INEC) had extended the deadline for collection of PVC, meant to end on Jan. 22 to Jan. 30, to ensure that everyone gets their voter cards.

He said it would afford everyone concerned enough opportunity to get their PVC handy for the electoral process.

Taiwo also said that his organisation, in partnership with Initiative of Change Nigeria, had sensitised Bariga community on the importance of getting their PVC.

“We have been organising series of events aimed at sensitising the public to go to their wards and collect their PVC.

Mr Julius Opara, Administrative Manager, Initiative of Change Nigeria, said that there were over 1.6 million uncollected PVC in the various wards and local government areas waiting to be claimed by their owners.

“So, we want people to go and collect these PVC because it is the power that gives them access to vote.

“That is why we are saying that everyone that has reached eligible age and registered should go and collect their cards at their various wards.

“There is no PVC collection centre on social media, so you should go out to the wards from 9 a.m in the morning to 3 p.m to collect your PVC and vote your choice candidate,” he said.

Opara said that it was important to collect it because the card determined who would represent the country and give us the comfortable living that we are all agitating for.

He said the voting process should not be left in the hands of politicians alone and that the youths should take charge because they had the population to dictate who governs using their PVC.

“The youths have the power and they have the population, so they should take back their mandate through their PVC,” Opara said.

Also, Mr Buba Luka, Head of Unit, Civil Society Organisations (CSO) INEC, Lagos, said that the unit collaborates with CSOs to sensitise the public on the importance of collecting PVC.

Luka said that the extension of the deadline would afford CSOs more time to conduct sensitisation programmes and reach out to more communities in the state.(NAN)