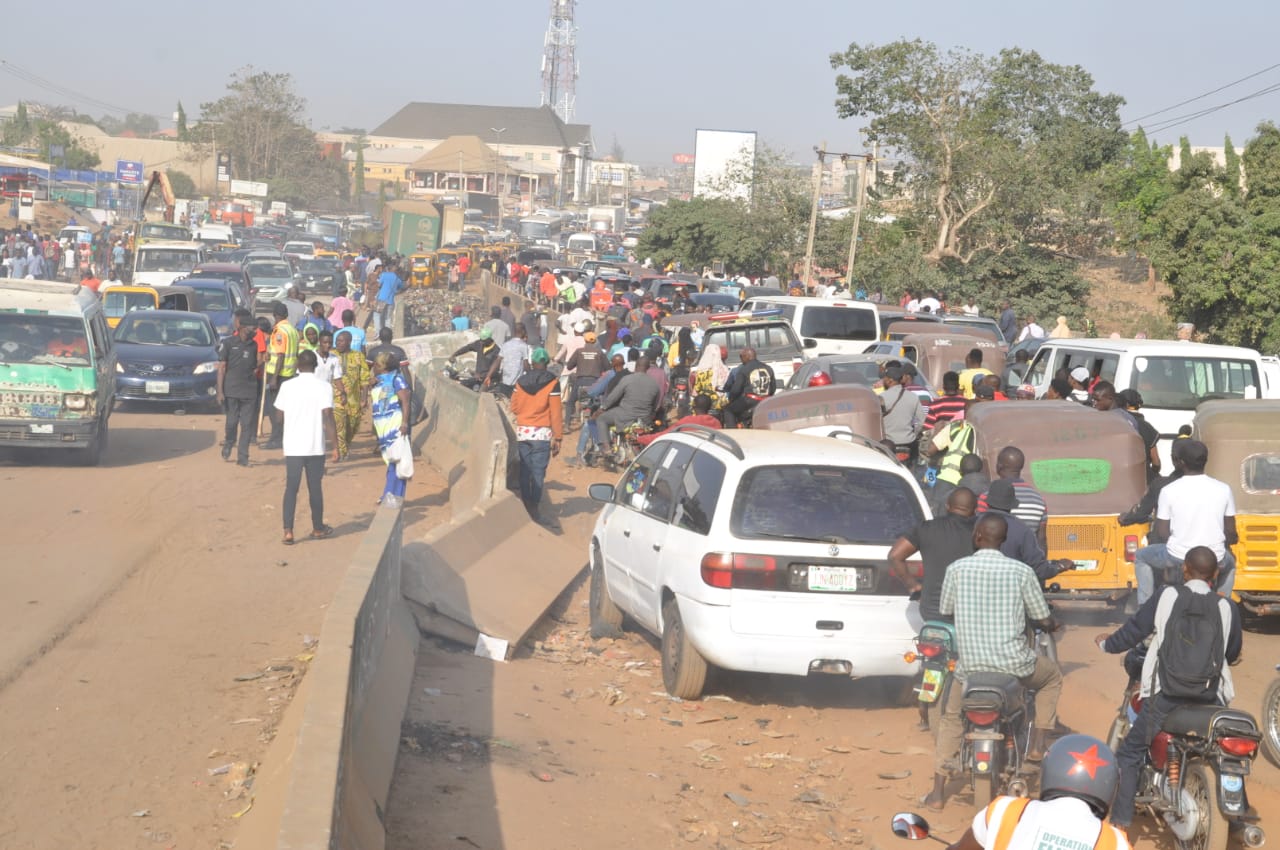 RESIDENTS, motorists, commuters and travellers on the popular Nyanya-Keffi expressway experienced hardship as a result of the ongoing repair work on the Ado bridge in Nasarawa State.

One lane of the road linking Ado, Masaka, New Karu, New Nyanya, Auta Balefi, Kuchikawu and Keffi towns, all in Nasarawa, has been barricaded following the repair.

Though a visit to the bridge on Tuesday morning revealed that the lane was opened for vehicular movement, residents told Daily Trust that the repair started on Sunday leading to gridlock with hundreds of travellers stranded.

Our reporter who visited the area reported that there was a traffic diversion after the popular Mararaba town, and precisely around a U-turn by the Abacha Bus Terminal close to AA Rano Filling Station.

The diversion was aimed at stopping motorists from plying the lane where the bridge repair work is ongoing.

Some petty traders from Ado, New Karu, New Nayanya, Auta Balefi, Kuchikawu and Masaka who spoke with our reporter said that the development was a threat to their economic fortunes.

One of them who simply gave his name as Francis, a tailor, said, “I can’t bear it any more. I won’t go to work tomorrow; I can’t kill myself. How can a road be this locked up?”

Similarly, a “chin-chin” seller who gave her name as Mama blessing, told Daily Trust that the situation was affecting her business, adding that if she doesn’t sell, her children would die of hungry.

Mama blessing who spoke in pidgin English said, “E no dey easy; we just the suffer. My brother, if I no go, my children no go survive.”

Daily Trust reports that the expressway is the only known route connecting Abuja and Nasarawa State.

Sequel to the gridlock that occured for several hours and later resulted in total lockdown on Sunday and Monday night, stranded passengers were seeing walking long distances.

Our reporter who went to the scene to observe things first hand, reports that pregnant women, nursing mothers, old men and women, the sick and children were all trecking due to road blockade.

When approached for comments, one of the nursing mothers said, “I’m tired, I can’t talk to you now.”

But when our reporter persevered, the woman from the North who simply gave her name as Hadiza said,” Imagine, my child is sick; we are just coming from the Medical Centre, Mararaba. This, is the worst day of my life.” Another commuter, a clergy, simply said, “Our government has failed, that is the only thing I can say for now.”

Some travellers who spoke with our reporter on condition of anonymity said they slept in their vehicle because the road was blocked on Monday night.

One of them, said, “The security of lives and property can’t be guaranteed in an atmosphere like this. Why are things so bad for this country?”

An undergraduate of the Joseph Sarwuan Tarka University, formerly called the Federal University of Agriculture, Makurdi, Miss Helen Ukange, who uses the road appealed to the government to do something legimately possible to alleviate the sufferings of the people.

Daily Trust observe that some motorists and especially those coming from the Lafia axis, were exploring alternative routes to the FCT.

Some drivers told our reporter that they had resorted to taking the route from Tudunwada, a small market near the popular Zimbabwe market on Nyanya- Keffi express way, to Orozo, Kurudu, Jikwoyi, old Karu to Nyanya, where they finally get into the main city centre.

Some civil servants in the Ado area had also said they adopted that route to keep their jobs intact and to avoid a situation where their cars would breakdown or overheat while navigating the gridlock.

They however, lamented that it was affecting them because of the quantity of fuel consumed during the manouvre on a daily basis.

The situation in the night was said to be damning as some Okada riders and even commuters were said to have created a quick route through the water side for crossing to Ado.

When contacted, the engineers said the repair would last for 7 days.

One of them who refused to be named said, “It’s not really a serious work; it’s not a major crack, so it will take about 7 days to finish.”