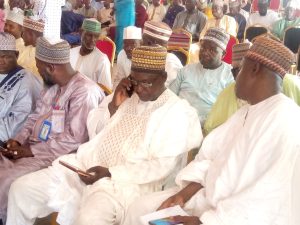 A cross section of participants during a presentation of e-learning materials by UNICEF in Birnin Kebbi, Kebbi State capital

Mr Isa Usman-Sokoto, UNICEF Representative in Kebbi State,  made the disclosure at the presentation of computers, radio sets and first aid kits to Kebbi State Universal Basic Education Board (SUBEB) in Birnin Kebbi, the state capital.

“We are intervening in 400 schools in nine local government areas, UNICEF cannot do everything, but we can complement the efforts of government.

“We are going to distribute 80 computers because the world is not only becoming a global village, it is now becoming a global hamlet. We want somebody to learn what is in Lagos , while he is at Gwandu or Danko Wasago or Argungu.”

Usman-Sokoto described the donation as a commitment of UNICEF to ensure that children received both qualitative and quantitative education in their respective primary schools as well as Integrated Quranic Schools.

He noted with satisfaction that visits to such schools showed that pupils could now read, write and even solve simple arithmetic , unlike wahat was obtained before.

The UNICEF Representative said the essence of the intervention was to reduce the number of out-of-school children by creating enabling environment for the children to have access to stay in school and move to the next level of learning and completing their education circle.

“We didn’t stop there, we looked  at how to improve teaching and learning to really take place in our intervening schools and other schools that we have not intervened.

“This has been done through series of training, through the methodology and modern approach of teaching,” he said.

While assuring that primary education was very sensitive, Usman-Sokoto stressed the need to have all hands on deck to ensure the attainment of desired goals and objectives.

Receiving the items, the Executive Chairman, KBSUBEB, Prof. Suleiman Khalid, commented UNICEF for the gesture and assured that it would be judiciously put to use.

He described UNICEF as a dependable development partner, adding that it was not just about the tangible materials donated, but it was about the best practices they always bring in providing support to improve teaching and learning.

Khalid said the organisation had brought state-of-the-art teaching and learning methodologies, assuring that the state would key into the new innovation for the good of the pupils and the state.

The chairman recalled that COVID-19 had taught the world a great lesson, saying, “in view of that, it shows that there is no alternative to e-learning.” (NAN)